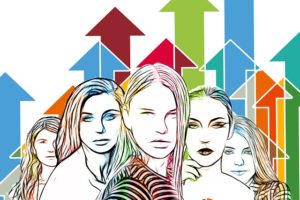 The New York Times recently published an article citing a study that showed most of us (including women) will draw a male if asked to make a sketch of a leader. Even when the picture is abstract, most participants used the masculine pronouns “he” and “his” when describing what they drew.

While this is useful in illustrating our implicit bias in this area, I find it interesting that most studies show that women are currently more effective managers in almost all dimensions, including organizational performance. This doesn’t mean that men can’t be as effective as women, but men often get by with less skill and poorer application of their skills. More accurately, men get by because of policies that create, justify, and reinforce the “man as leader” bias.

It has become normalized, not just that women need to perform better than men to be accepted, but for men to turn a blind eye to their own incompetence and ineffectiveness. It’s easy to rationalize being an unnecessary cause of business disruption, lost opportunities, and human suffering. Men don’t have to be as effective as women to “succeed.” So, why bother?

I’ve been in the corporate system. I’ve seen firsthand that policies are often stacked against “traitorous” men who would like to do better by women. I also know that a man’s decision to remain inferior is a cop out. So is the worry about unfair accusations related to #METOO. A competent manager of any gender is unlikely to hire someone who will be vindictive or create circumstances in which the vindictive can thrive. Any alarms around witch hunts just screams, “I don’t know what I’m doing and I’m afraid of getting left behind!” Which brings me back to the underlying issue of the need to boost everyone’s capabilities. Not coincidentally, that expectation of competence is foundational to ongoing personal relevance in the workplace.

If you are a male leader, it’s never been easier to outcompete your rivals. Simply hire, develop, promote, and fairly pay more women (and every other element of diversity). Oh, and expect, prepare, and support men to do their damn jobs!

© 2018 All Rights Reserved​ By Jasonmartinpresents